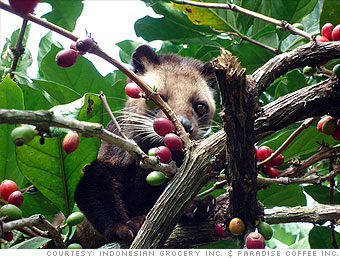 Ever hear of coffee that has been made from…cat poop?  If so, you’ve probably thought it was just an urban legend.  The crazy news is, it’s absolutely true.  Many different coffee-producing countries have actually produced “crappy coffee”.  No, it’s not a cheap cup of coffee…it’s the exact opposite.  It’s the most expensive coffee in the world…but where it comes from is unbelievable.

And in our opinion…it’s a load of crap.

What is Civet Coffee?

Kopi Luwak, or civet coffee, was popularized in the 2007 movie The Bucket List. For those unfamiliar with civet coffee, it is the most expensive coffee in the world in which coffee berries are eaten by a cat-like creature, the civet, and then defecated. Workers then pick through the feces for the undigested beans. These beans are then roasted and sold for coffee production. On average, civet coffee sells for about $60 for a meager four ounces.  In other words, this coffee goes for about $10 a cup.

How was this civet cat coffee discovered?  That’s a great question.  It has been noted that the civet cat would only eat the ripest coffee berries in the fields—therefore, those that the cat ate were the best beans possible.  Then, when the berries are digested, the civet’s proteolytic enzymes seeped into the beans, making shorter peptides and more free amino acids.

What does civet coffee taste like?  It varies depending on who you ask. Some say it’s the best coffee in the world.  Others don’t think it’s worth it.  Our resident Q Grader, Paul Massard, who tastes hundreds of different coffee flavors a day doesn’t think the coffee is good at all.  “It’s not that great,” he says.  “I think people just think it’s good because of the marketing behind it.”

Why is Civet Coffee So Expensive?

Paul Massard, our Q Grader, is right.  It’s not the quality of the civet coffee that makes it so expensive; it’s all in the marketing behind it.  Because it is so “rare”, the supply-and-demand of civet coffee increases the price of what it’s actually worth.  In reality, civet coffee is a substandard, lack of flavor, slap-in-the-face gesture to coffee manufactures everywhere.  When you purchase civet cat coffee, you’re not just paying $400.00 for a pound of crappy coffee…you’re also reinforcing animal cruelty.

Producing civet coffee is morally wrong.  The civet, which once roamed free and ate the berries as a selective part of its diet, not a main staple, no longer has this wild luxury.  Today, coffee pickers and manufacturers keep civets in tiny cages and force-feed them coffee berries for digestion.  This horrible diet, along with stress of living in tiny cages, leads to a high mortality rate for these tiny cats. In fact, the poor living conditions of the civets causes much stress to the animal, which alters its digestive system.  This in turn alters the flavor of the beans making them worse than they were before.

Civet coffee farms are popping up at an alarming rate in southeast Asia. This absurd coffee craze has even grown to include berries from the feces of the Jacu bird and elephants. Yes, elephants.

In the green hills of northern Thailand, a herd of 20 elephants excretes some of the world’s most expensive coffee. Known for being earthy in flavor and smooth on the palate, this “elephant brew” is made from beans eaten by Thai elephants and plucked a day later from their dung. A gut reaction inside the elephant creates what its founder calls a “unique” taste. At $500 per pound, this elephant coffee is among the priciest in the world.  Canadian Blake Dinkin spent $300,000 of his own money just to create this elephant dung-based blend.

Whether the coffee comes from a civet cat, a Jacu bird or an elephant, we must remind you—this coffee is CRAP (literally and figuratively)!!  Not only is the coffee lifeless to the taste buds, but it is also produced through the act of animal cruelty.  Good coffee isn’t made through animal digestion. Good coffee is made by selecting the ripest beans and then spending years of work to find the proper way to roast them. While others pick through poop to make money, we here at The Roasterie will continue to do what we do best—produce the best-tasting coffee from the best beans in the world.