A Letter From Normy

Hey I wanted to post Normy’s Adventure Diary from our last trip to Huila. Normy’s journals are always very heart felt and I love to read them so I thought it would be nice to share this one. Reading it makes me feel like I am there in Colombian with all the people we care about. Enjoy!

SATURDAY MARCH 14TH, 2009
We catch the early morning flight out of Bogotá for a short hop to Neiva in southern Colombia. It’s been eight years since we have been in the state of Huila and it feels like coming home. Eight years ago we had to be cautious as rebels were very active but all that has changed. I remember then being told to keep a low profile but with Danny being six foot eight that was hard to do. Our guides are Roberto Velez and Ricardo Granados who work for out exporter Condor South America. We land safely and start the four and a half hour journey by car south to the town of Pitalito. The mountains loom large as we talk about coffee on the very good roads. We stop on a high ridge to look over the Magdalena River which flows far below, the ant like fishermen are 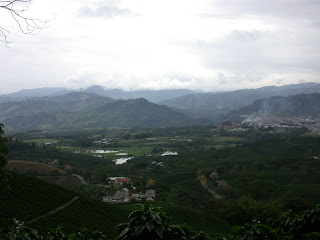 busy at their craft. Back in the car we are soon stopped at a police checkpoint and everyone is searched for weapons except me, the likely reason the rebels have been stopped being so active, we see police presence everywhere (surprisingly we saw less security in Bogota than eight years ago). Lunch is at the restaurant Apepitos for typical Colombian meal of rice, chicken and soup, the portions are very large and if a bowl goes empty they bring another one. A dog in the distance seems to be unhappy and barks relentlessly, we joke that the restaurant should be called “The Barking Dog Cafe”. As we dine we talk about the main Colombia crop which was down 20% (2 million bags) which has made Colombian coffee prices go up, supply and demand in action. The reason is that the rains went beyond the normal time they would normally cease, speculation about why goes from a fluke of nature, El Niño, global warming to the wrath of God. Everyone is wondering about the Mitaca (fly crop) that will be picked shortly, indications are that it too will be short. Colombia like most countries that sit on the equator have a main crop and a second smaller crop each year and Colombia is currently ranked number three in world production behind Brazil and Viet Nam. We arrive at Pitalito a town in Southern Colombia that houses a receiving station for the coffees we purchase, this is not the same building that we visited on our trip here eight years ago, it was much smaller. The warehouse is virtually empty except for a very few bags that represent the last of the main crop, in one corner is a child’s tricycle. We go into the office and cup the last of the main crop coffees, one of them has phenol in it which is a mysterious iodine medicinal taste (theories of what cause it range from fertilizer, the drying process, the varietal or the wrath of God) that is prevalent in Colombia, another cup is borderline ferment which is caused by being in the fermentation tanks too long. Ricardo says that when the coffee arrives from the San Augustine region father south where our coffees are grown they are kept separate here from the other coffees of Huila as they are the best, all lots are cupped and the best are held for the Roasterie. We tour the town and settle into the Hotel Timanco for the night going out for a late supper.