February 22, 2011
by PAUL MASSARD, BEAN HUNTER
Our second day of coffee hunting began with a long drive back through San Jose and up to the West Valley; this is the region of the country where we get our Don Quijote coffee. Once we arrived at the processing mill, we started off by having a cup of coffee with Norman and Erik, the men who run the mill. This is the same mill where I spent a week working last year, so it was good to see my former co-workers and chat with them about this year’s harvest, as well as what’s new in their lives. After we took a tour of the facilities, I showed everyone my former living quarters. We then had a little shoveling contest and tried to disperse the coffee evenly on the patio from a specialized wheelbarrow with an opening on the bottom. After a few laughs (some of us weren’t as good as others) we headed over to what would be one of the highlights of the trip. 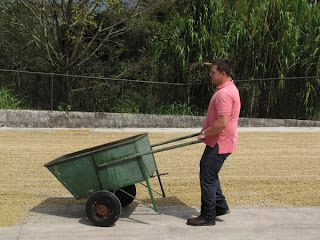 Me attempting to maneuver the wheelbarrow
Just a short walk from the mill are the two childcare centers that The Roasterie helps fund. This year, as a small gift for the children and their teachers, we each brought along a few boxes full of school supplies and toys. We were greeted by the children singing us songs, and it was great to see how happy they seemed. After some brief introductions, we talked about what the school really needed, and came to the conclusion that they were in need of a larger kitchen and more kitchen supplies. We talked more about how they are progressing and how we can continue to help them. 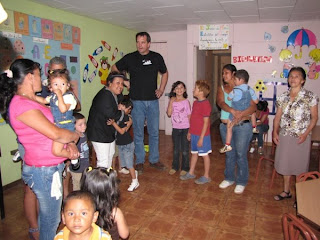 Visiting the first childcare center
After saying our goodbyes, we walked up the hill and over to the other childcare center. Once there, we were again greeted by the children singing songs for us. We then took some pictures with the children, and they loved to see themselves in the photos. For about 20 minutes, they were all lining up to have their pictures taken just so they could see themselves in the camera. When we broke out the video camera, they were even more excited, seeing everything in real time on its small display screen. After some more play time, we talked to the teachers about what they were in need of this year — which was updating the playground to make it safer. 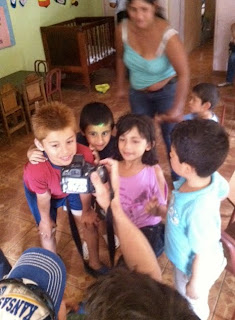 The kids seeing themselves on camera
Once back at the mill, we took a tour of the coffee silos and got to see first-hand how they put the identifying marks on the burlap bags ― and man, was it messy! After saying goodbye to everyone at the mill, we were on our way up the mountain to see some coffee fields. The harvest in this area was just about done; they had about a pass or two left on the trees to collect the final cherries that were just maturing.
Stay tuned for Part 3 of our 2011 trip to Costa Rica…