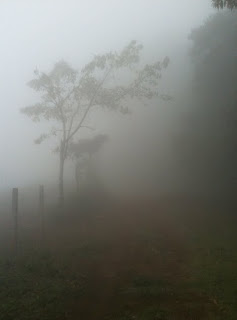 A cloud forest
by PAUL MASSARD, BEAN HUNTER
Day five of our trip started with a three-hour drive to the Aproceto Pierda Blanca cooperative mill, which is a great little two-year-old community cooperative with 40 members. In total, they farm just over 50 hectares. It was a beautiful drive though the country side, and it got even better once we neared our destination. These farms and mills are so remote that they are usually only accessed by helicopter, and our car couldn’t make it up to the mill. So, we all hopped in the back of one of the mill operator’s trucks and rode a good 20 minutes until we finally reached the mill. After the long, bumpy drive, we were treated to some of the best coffee that I have ever had at a coffee plantation. The reason for this is that the “good” coffee is always exported so they keep and drink the inferior coffee. 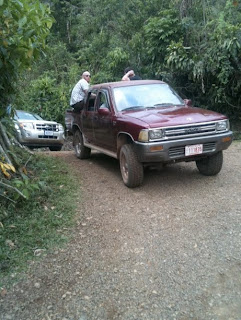 Livin’ on the edge

After we sat and talked (and sipped) we were given a tour of the wet mill, the drying patios and then the coffee warehouse where they let the coffee rest before it’s polished and exported. Then, we were greeted by the Mayor and Vice Mayor of the town who joined us for lunch. And what an amazing lunch it was! We were invited to the home of the mill’s president of the board. His wife made us an amazing traditional Costa Rican meal, finished off with some of his home made “juice” which was strong enough to light our breath on fire after a taste. 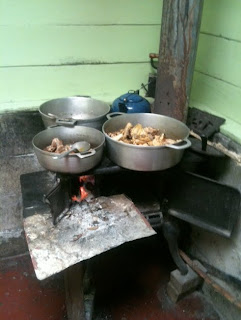 We had some coffee to clear our palates, then headed up to the top of the mountain to visit Finca Provencial, which was another 30-minute ride in the back of a pick-up truck — but man was it beautiful! Once at the top, we were in the middle of a cloud forest in which we could barely see 20 feet in front of us. After a quick tour of the farm (the reason for it being quick is that we really couldn’t see much because it was so foggy) we went over to the community center. Someone had left a soccer ball, so we decided that we could kick it around for a little while. We all agreed that there must have been something wrong with that ball since none of us could get it in the goal. 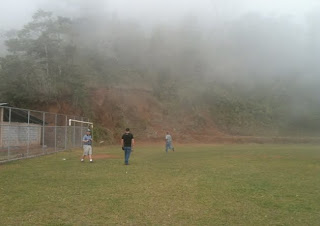 A foggy game of futbol

On our way back down the mountain, we were really hoping it would clear up so we could catch a glimpse of the Pacific Ocean. Unfortunately, for us it didn’t, but it did start to rain, which made the fact that we were riding in the back of a truck on a really bumpy road all that more fun. Once back at the mill, they showed us how they juice sugar cane, and we got to sample some of the juice as well as some of their local honey, which was very tasty.

The next (sixth) day we headed over to the Poas volcano for a little sight seeing. On this day, it was clear and we could see the crater. Although the view was amazing, the smell was not so attractive. After enduring what smelled like rotten eggs, we decided to hike over to the old lagoons, created by the now-inactive volcano next to the Poas. The hike was pretty intense as it was uphill for about 30 minutes at very high altitudes (we again used the altitude as the reason why we were all so winded, it couldn’t be the fact that we were out of shape!). After the hour-long hike to and from the lagoons, we headed back to Coffee County.

Our last stop was Las Llajas, where we again toured the mill and were treated to a cupping. (Man, were those some amazing coffees; you will definitely need to be on the lookout for one of those coming later this year to our cafes — especially the Honey Processed coffee, which is one of the best coffees that I have tasted to date). After some great coffee talk, and French pressing some more of their coffees, we sadly headed back toward our hotel to pack our bags for our impending departure from Costa Rica the next morning.